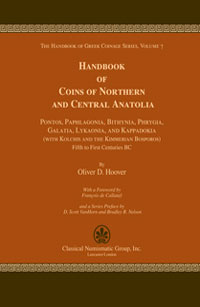 The catalog covers the territories of the Black Sea coast, beginning with the Kimmerian Bosporos and ending with Bithynia. The catalog then moves to the contiguous regions of the interior - Phrygia, Galatia, Lykaonia, and Kappadokia. The mints within each region are arranged alphabetically. The coinage within each city is arranged chronologically, beginning with the Archaic issues and continuing through the later civic issues in the name of Alexander. Issues in this catalog arranged in the catalog with silver first, followed by bronze; each metal is arranged by denomination, largest to smallest. Both civic and royal coinages of these areas are covered.